Mako Mermaids is an Australian television program for children, pre-teens and teenagers, and is a spin-off of H2O: Just Add Water. The series, announced in July 2011, is produced by Jonathan M. Shiff in association with Nickelodeon. The show was originally titled Mako: Islands of Secrets, but was later changed to Mako Mermaids. Then the title changed again to Secret of Mako Island and back to "Mako Mermaids" again. Mako Mermaids will debut on Friday 26th of July, 2013 in the US, Canada, UK, Latin America and other provided countries on Netflix. Australian television station TV Ten will also debut Mako Mermaids on July 26th, 2013.

Mako Mermaids is about a boy named Zac. Zac is a teenager and goes camping one night on Mako Island. Sirena, Lyla, and Nixie are three mermaids the show also centers on. They are guardians of Mako Island and part of the Mako Island mermaid pod that they were born into. On the night Zac goes camping, Sirena, Lyla, and Nixie get in an argument and fail to stop Zac from falling into Mako's magic moonpool waters. He passes out, and they get him. The full moon comes overhead, and, sure enough, Zac is transformed into a half-human half-merman! Sirena, Lyla, and Nixie are banned from the island and have to go find Zac to take back his powers, or else they will never be able to return to Mako and will be outcasts forever. They get legs, powered by Sirena's moonring, and hope to capture Zac in his natural environment. They venture on land, and surprisingly find Zac is using his powers for good. They realize that their plan might be simple, but not easy. Next they meet Rita Santos, the school principal, who is a mermaid. Rita begrudgingly accepts to help them while they're on land. Sirena, Lyla, and Nixie realize that Zac is unlocking a huge mystery. There is a secret cave hidden in Mrs. Santo's office, and a trident hidden on Mako. Things "get a whole lot worse" and they must find out how to take back Zac's powers, and return back home.

The series will consist of twenty-six episodes that are each thirty minutes. Filming was to begin in April 2012, but it was postponed to the beginning of May. On 8 May 2012, Shiff Productions announced the principal cast and the start of the shoot. Filming ran through 12 October 2012. The series was at first titled Mako: Island of Secrets, but was then re-titled to Mako Mermaids and later to Secret of Mako Island. As of March 2013, the series is again titled Mako Mermaids per its first trailer.

Beginning on 8 November, 2013, the series will be broadcast in Australia at 8.00 a.m., Friday mornings, on the digital television channel Eleven. 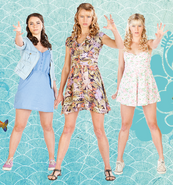 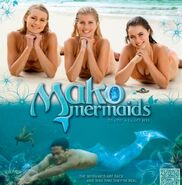 Add a photo to this gallery
Retrieved from "https://mako-mermaids1.fandom.com/wiki/Mako_Mermaids?oldid=9334"
Community content is available under CC-BY-SA unless otherwise noted.